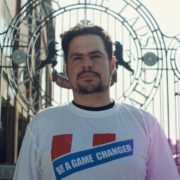 Newcastle and Sunderland’s intense rivalry is being set aside today, as they send an important message to fellow football fans on World Mental Health Day – mental health has no team and no colours.

Brought together by Newcastle United Foundation and Sunderland AFC’s Foundation of Light, Geordies and Mackems alike are being encouraged to start potentially life-saving conversations with family and friends, or to take their own steps to share their mental wellbeing with others.

This year’s theme for World Mental Health Day is ‘mental health for all’, so the Newcastle United Foundation and Foundation of Light have released a powerful and compelling video featuring the stories of two fans who have received support through the club’s official charities, and as part of the Be a Game Changer campaign.

Andrew a life-long Sunderland fan, speaks about how a difficult, and heart-breaking, situation was the catalyst for him to seek help and open-up about how he was feeling. The life-changing support he needed came when he visited the Match Day Mental Health Hub at the Beacon of Light – a free service created by Sunderland AFC supporter group, Branch Liaison Council, and supported by the Foundation of Light – which provides fans access to free trained counsellors from Washington Mind.

Andrew a diehard Newcastle fan, tells of how he struggled with poor mental health for a number of years as a result of anxiety relating to his weight. Last year he tried to take his own life but found support through Newcastle United Foundation.

Ashley Lowe, Health and Wellbeing Manager at Newcastle United Foundation, said: “On World Mental Health Day, we are sharing an important and powerful message from Newcastle and Sunderland supporters themselves, who have come together to tell others that mental health is something you can talk about and you will be listened to. One in four of us will experience mental health issues at some point in our lives. These issues are indiscriminate and mental health has no club and no colours – our experiences with mental health make us human and we need to talk about it more openly to encourage potentially life-saving conversations. For men in particular, who love their club and their city – the Be A Game Changer campaign is here to support them and to reduce the stigma surrounding mental health.”

Funded by the North East and North Cumbria Suicide Prevention Network, the Be A Game Changer mental health awareness campaign aims to reduce the region’s suicide rates among men aged 20 to 49. In January this year, both charities joined forces to make a combined commitment to promote positive mental health to thousands of supporters visiting St. James’ Park and the Stadium of Light through the campaign.

Liz Barton-Jones, Foundation of Light’s Head of Health and Wellbeing, said: “We know that there are so many people out there struggling in silence; particularly men who are often led to believe sharing their feelings is ‘not what men do’. “Our Be A Game Changer campaign is there to let people know they will be listened to and supported, and it’s okay to not be okay. We hope the powerful video and the fans stories gets people talking – in Sunderland and Newcastle – as we know all it takes to potentially save a life, is to start that first conversation. If we can encourage just one fan to open up it’s been a success.”

The important and powerful message comes at a critical time for the region. The COVID-19 crisis has not only left stands at both stadiums empty, with supporters unable to share matchdays with loved ones or fellow fans, it has also resulted in an increase in mental health related issues as thousands struggle with social isolation, the worries of job security and the financial impact of the pandemic.

Throughout lockdown, both Foundations have adapted their health and wellbeing programmes to ensure participants of all ages remained engaged – in Newcastle, this included more than 1,000 phone calls made to elderly and vulnerable people, around 200 people given mental health guidance to lower anxiety and feeling of loneliness, and NHS staff invited to access Be A Game Changer mental wellness guidance online.

In Sunderland, elderly members of the community were supported through regular contact though phone calls and WhatsApp messages as part of the Extra Time Hub, with SAFC Director David Jones personally calling 45 fans. Sit and Be Fit exercise videos were shared online for those unable to get out, and the dedicated free fitness programme for fans, Fit Black Cats, temporarily moved to Facebook to continue supporting members, with each losing an average of 5kg during lockdown.

Be A Game Changer Facebook communities for both clubs have also played their part during lockdown as they have become an increasingly important hub to thousands of people, offering comfort, advice and practical information for those experiencing mental health issues or for friends and relatives supporting someone else.

With some lockdown restrictions lifted, both charities are back to operating a number of weekly health and wellbeing programmes, including Walking Football, free over-40s NHS health checks, specific mental health sessions with Fit Black Cats, 12th Man and Washington Mind’s Get Set to Go programmes.

The Be A Game Changer campaign was originally launched in February 2019 to encouraged Newcastle United supporters to talk about they are really feeling and to recognise when they or their loved ones are in crisis.

For more information about Be a Game Changer in Newcastle, visit nufoundation.org.uk/beagamechanger.

For support and further information in Sunderland, please visit foundationoflight.co.uk/beagamechanger.