News
You are here: Home1 / News2 / Past Projects3 / Network Rail 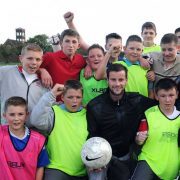 EFL clubs helped to reduce the numbers of young people injured or killed after trespassing on the railway through a series of sports and educational activities to divert young people away from the dangers of playing on the tracks.

The initiative was a development of Network Rail’s Rail Life programme, which has successfully worked with schools and community groups to deliver safety messages in fun and engaging ways.

Tragically between 2010-2015, 164 people lost their lives after going onto the tracks. Of these, 70% were struck by trains with 18% suffering electrocution by coming into contact with the power supply which can be as much as 25,000 volts. The peak ages for trespass fatalities are late teens and earlier twenties, with around one in five deaths in this age group.

Mike Evans Director of Operations at EFL Trust, commented, “Football clubs are at the heart of their communities in an emotional as well as physical sense. As such they have an incredible ability to reach people, where others may struggle. Our partnership with Network Rails shows how football can use this ability to talk to young people about a serious issue and make a positive difference to people’s lives.”

The partnership saw each club identify a player ambassador, who took on an active role in the project by attending sessions and acting as a role model. EFL Trust and Network Rail also ran small sided boys and girls football competitions with teams from each club in a national final.

The clubs involved were: