News
You are here: Home1 / News2 / News3 / 4homepage4 / NCS Graduate, Josh, awarded for his work in the community 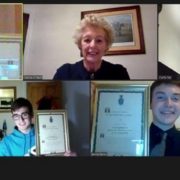 Josh Newbold, 17, from Rotherham has been awarded The High Sheriff Award after being recognised by The South Yorkshire Violence Reduction Unit for his work in the community whilst on NCS (National Citizen Service) with Rotherham United Community Sports Trust (RUCST).

This award is a credit to Josh and it is so inspiring for such a young man from South Yorkshire to really care about the community he lives in. He has inspired others around him to follow the volunteering route. Josh stands out as a team player particularly when planning and delivering projects to his community.

After speaking and reading about Josh it was my absolute pleasure to present him with my High Sheriff Award in 2020. I know Josh will continue to inspire others and be a credit to the young people of today.”

Josh started his journey on NCS to meet new people, broaden his future horizons and work on his own individual skills. Whilst on NCS Josh stood out as a key member of the team, particularly when his team began planning to deliver a social action project in their community. It was evident that he is passionate about his community and making a positive impact to people who need it the most. 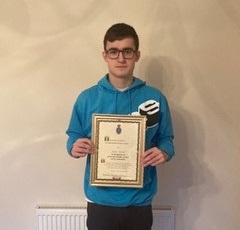 “NCS was such a great experience and provided me with endless opportunities; I aim to continue taking each possible opportunity as I know it not only benefits me as an individual but allows me to benefit the local community too. Young leadership is something I’m highly passionate about and the acknowledgment from the High Sheriff for young leaders in the area demonstrates how Rotherham continues to provide young people with great chances.

For their social action project, Josh and his team decided to raise money for Bluebell Wood Children’s Hospice. Josh had been volunteering at the hospice for over 2 years by raising money and volunteering in the Hospice Charity shop. He has raised hundreds of pounds and during NCS he passed on his inspiration to other young people around him to get involved with charity work.

Following his summer on NCS, Josh was keen to continue his journey on NCS and get involved in the opportunities provided to him and was successful in his application to being part of the NCS Local Action Group where he continue to make a positive difference in the community and get his voice heard.

“The thing that stood out to me about Josh was how much he cared about his community. He has a very easy going personality and is very level headed. However, when working with the group, he speaks with real authority and passion on the social issues where he lives. Josh is very talented and has a wide range of interests but he is willing to use his skills and passions selflessly to make a positive difference.”

Since received his award Josh is even more committed to support his community. He said:

“The award from the High Sheriff definitely means a lot to me. For me, doing NCS and being a part of group social action projects has never been for an award but the recognition from an individual such as the High Sheriff is very meaningful. This award has inspired me to carry on and continue supporting my local community.”

Josh will be busy this Saturday joining thousands of young people across the country to make a positive difference in their community as part of NCS Action Day. On the day, young people will be delivering social action to help causes such as tackling loneliness and environmental issues, raising awareness of homelessness mental health and regeneration projects in local parks and community spaces. Find out more at https://wearencs.com/action-day.