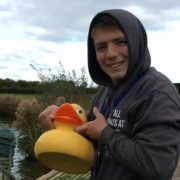 National Citizen Service (NCS) graduate Luke Dallen, who completed the programme with MK Dons in September 2015, returns to the programme this year as a team leader to help guide even more young people.

Luke, now aged 17, initially played for the MK Dons Sports and Education Trust’s Disability team and was encouraged by his parents to sign up for NCS in an attempt to combat his issues with confidence and communication.

Luke is the first to admit he was dubious to start the programme he said: ”I was nervous about taking part, but my parents and I gel that it would benefit me massively in the future.”

His attitude and commitment to MK Dons and the NCS programme lead the team to offer him a position as a team leader for their delivery of NCS this summer.

Thrilled Luke commented: ”I chose to do it again because I wanted the chance to be as supportive as my team leader was, and create a fun environment for the participants. I also wanted to improve my confidence, communication and leadership skills even further.”

To date, more than 300,000 teens have taken part in NCS across the country. For any young people taking part, Luke said: ”It’s a great opportunity to develop loads of new skills that will benefit you moving forward. You will also make loads of new friends from different towns and villages which brings you so much confidence. It really takes your life to the next level.”

MK Dons are one of 32 clubs across the EFL who are involved in an NCS Match Day this season. Last weekend’s fixture against Coventry saw The Dons host theirs. The club’s first team players played an important role during the occasion, warming up in NCS branded t-shirts and meeting programme graduates. Stephen Greene, Executive Chairman of the independent management body of the National Citizen Service and CEO of international pro-social media company Rockcorps was also present.

There are still places available for 15-17 year olds to get involved this summer. To find out more visit – www.ncsefltrust.co.uk