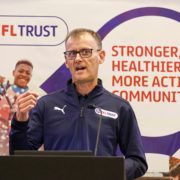 Mike stated that the decision to step down was an “incredibly difficult” one, but as the EFL Trust begins consultation with stakeholders about its strategy post-2024, said it felt like the “right time” for a change.

After 14 years with the EFL Trust, Chief Executive Officer, Mike Evans will step down from his role before the end of the 2022/23 season.

“When you have a role that you enjoy and are fully committed to, finding the right time to leave is incredibly difficult.”

“Especially given my longevity with the Trust, the belief I have in what we do as a charity and the amazing things we have achieved over the years.

“The EFL Trust continues to develop and there are many opportunities for our Football Clubs to further increase the role they can play in supporting communities up and down the country with a new strategy being developed to maximise these opportunities.”

After a successful 15-year career in the textile industry, Mike joined the EFL Trust in 2008 as a Regional Manager and took on the management of 15 Football Clubs’ charities to support them with their governance, business planning and funding.

Shortly afterwards, further success came for the Trust with funding secured from The Football Pools, Network Rail and significantly, the first pilot for the National Citizen Service in 2011.

After being promoted to General Manager in 2011, significant growth followed for the EFL Trust under Mike’s leadership and a charity with just ten employees in 2012 has seen consistent growth over the subsequent decade to today’s position of a team of more than 70 employees.

Financial growth has followed a similar trajectory. Between 2011 and 2021 the turnover of the Trust increased from £5.7m to £21.7m, allowing the Trust to provide more funding to CCOs in order to effectively deliver its vision of Stronger, Healthier, More Active Communities.

Key long-term partnerships have developed with the NCS Trust, Ferrero UK and the University of South Wales during Mike’s tenure, and relationships with the key football partners such as the PFA, the Premier League and the FA have all strengthened.

Additionally, numerous key programmes, funded by various government departments, to tackle loneliness, improve health and wellbeing and help people develop the skill to find meaningful employment were also secured as the EFL Trust continued to play an invaluable role in tackling some of society’s biggest challenges.

“It feels right for a new Chief Executive to come in and help shape the next chapter.”

“I’d like to thank the Board for their understanding and look forward to working with them over the coming season to prepare for the next successful chapter for the EFL Trust.”

“I want to take this opportunity to thank Mike for his massive commitment and contribution to the EFL Trust over the past 14 years.

“Mike leaves the charity in a healthy financial position and with an outstanding team of skilled and highly motivated staff, and a refreshed Board with a determination to keep pushing the role of EFL Clubs in their communities forward.

I wish him all the very best for the future.”

Mike’s leaving date will depend on the arrival of his successor following the conclusion of the recruitment process, which is now under way.

Making the unnoticed, noticed, “Many of us felt that the homeless go unnoticed...
Scroll to top
This website uses cookies to improve your experience by allowing the website to recognise you on subsequent visits and make navigation quicker,. We do not collect any personal data or share data with third parties. Press accept to opt-in to use of cookies on this site.Accept Reject Read More
Privacy & Cookies Policy