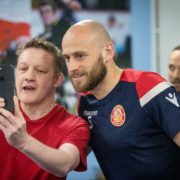 “The sport really changed my life in so many ways mentally and physically. I have lost weight and also have dropped my blood sugar levels to a safer level.” say Duncan, who takes part in Stevenage FC’s Get Set to Go Football Session.

Duncan, aged 50, has a history of suffering with anxiety, depression and Type II Diabetes. He joined the Get Set to Go, which is run in partnership with Mind in Mid Herts, back in January 2020. Despite initial nerves linked to his anxiety, Duncan joined the sessions from week 1 and found that as the weeks went on, not only did his physical health improve, stating weight loss and better control of his blood sugar levels, but his mental health also significantly improved.

He says “The best thing I could have done was getting in contact with Mind in Mid Herts, as I wanted to be more active to lose weight and get my blood sugars under control. Mental health is just as important as physical and there should be no shame in saying ‘I think I need help.”

Although the football sessions had to be suspended during the lockdown period, Duncan continued to stay active by joining in with virtual fitness sessions lead by the Foundation and Mind in Mid Herts. He managed to improve his fitness levels even further through these sessions and found that the weekly group engagement was key in maintaining his social contact. These sessions took place weekly and helped maintain a sense of community for the participants  keeping them engaged in being active. There was even ‘guest visits’ from the First Team Manager Alex Revell. 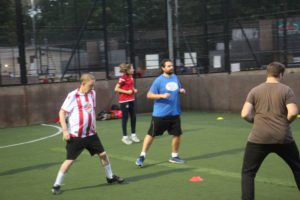 Duncan has made remarkable progress with Stevenage FC, so much so, he has been appointed the Clubs Get Set Go Champion.  As part of this role he, this week, presented Stevenage Captain Scott Cuthbert with his PFA Community Player of the Year Award for 2019/20.

The outdoor football sessions have now returned and Duncan is thriving by being able to engage with like-minded people who are in a similar position to him and continue to play the sport that he loves.

Duncan concludes, “A massive thank you to everyone involved with Mind, Get Set to Go and Stevenage FC Foundation, you really have changed my life for the better.”

Tweets by @FL_Trust
Simon “The football sessions at Tranmere have helped me deal with my anxi...