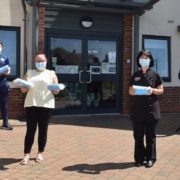 Wigan Athletic have delivered 2,000 facemasks to Care Homes and Hospices with  money raised from Latics’ academy, supporters and players

Wigan Athletic Community Trust have this week been out distributing 2,000 facemasks to care homes, hospices and other organisations thanks to the donations from the Wigan Athletic Academy, the club’s supporters and first team players.

So far, over £2,000 has been raised to provide Personal Protective Equipment (PPE) to many organisations across Wigan.

Chris Durnan, Manager of Ash Tree Care Home Hindley, who received a delivery of masks, said: “A big thank you to Wigan Athletic for the kind donation. It’s heart-warming to know we are being thought about by so many different people in the current pandemic. Thank you especially to Wigan Athletic Community Trust for thinking of us and delivering the vital PPE to us in these difficult times.”

Fox delivered hundreds of items of PPE to care homes and hospices in his local area.

Latics supporters then continued to back the campaign via donations with the support quickly raising £1,000 before Wigan Athletic’s academy staff and players topped those donations up by backing academy strength and conditioning coach Mark Stone to row a marathon in his back garden, via donations.

“Firstly, I would like to thank everybody who has donated to this cause; we know the 2,000 facemasks will be genuinely appreciated and the staff that have been delivering the masks have spoken of the gratitude from all of the recipients.

“This is a perfect show of the unity required to thrive in the situation we are presented with. First team players, academy staff, staff across all different areas of the club and supporters have come together to donate to this cause.

“The excellent Wigan Athletic Community Trust have been out delivering these masks – thanks to the support of one of our long-term partners Westwood Motor Group – in a safe and responsible manner and I couldn’t be more proud that our people continue to prioritise the health and wellbeing of our community during this challenging time.”

How you can get involved?

Tweets by @FL_Trust
“The feeling of helping your local community when they need it the most is...