The Kinder + Sport Kids Cups on the hallowed Wembley turf saw a Wimbledon double bill, the best goal of the playoff weekend and the dreams of 48 children come true. Prior to making it to Wembley, all those that took part had to go through a number of qualifying stages to represent their local teams.

In the League 1 final, Norton Free Primary School representing Sheffield United, met Eye Primary School representing Peterborough United, and following a dominant display ran out 1-0 victory! Mackenzie Maltby scored an absolute screamer of a goal… arguably the best of the Play-Off weekend! Although the Norton players saw a lot of the ball in the first half they were unable to take their chances, with Ben Kemp, Danny Church and Bradley Taylor all going close. The winning goal came in the 2nd half when a throw from Frankie Hirst found Danny Church, who passed it onto Mackenzie Maltby who struck a first time shot from 20 yards into the top right corner. It was a goal worthy of winning any game at any level and the full time whistle brought amazing celebrations amongst the Norton Free players.

How about this for a strike?! @SUFC_tweets‘ Mackenzie Maltby in our #KidsCup Final at Wembley yesterday…https://t.co/g5yCCY68P5

Represented by Hilton Primary School, Derby County were crowned as the champions of the Kinder+ Sport Football League Kids Cup at Wembley Stadium, winning 2-0 over Ipswich Town represented by Britannia Primary School! Captain Kaide Gordon opened the scoring with a fine long-range effort in the first half before he turned provider for Jack Harrison in the second period.

Cleves School represented AFC Wimbledon in the League 2 finals, taking on Mansfield Town represented by Samuel Barlow Primary School. Wimbledon dominated most of the game claiming a 2-0 victory, despite an uneventful first half with Mansfield captain Aidan Reader taking a long-range free-kick, and Vigrass also seeing his effort steer narrowly wide of the post. Dons turned on the style in the second half, and went ahead through Munroe after he planted his shot into the bottom-left corner. Vigrass followed it up with a similar strike, rounding three Stags players before also finding the bottom corner of the net, ensuring AFC Wimbledon’s name was etched onto the Kinder+Sport Kids Cup trophy. 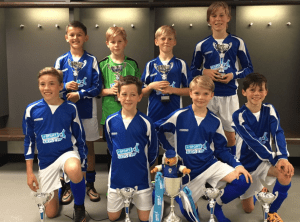