News
You are here: Home / News / News / “I might have lost my life to mental illness if it wasn’t for... 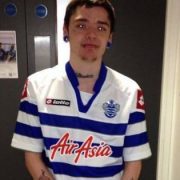 James Casling, a 22-year old from north-west London, was left in a very dark place on the day of his fifteenth birthday when his father committed suicide. The teenager was sectioned three years later after trying to take his own life on multiple occasions. But a simple offer from QPR Community Trust to play football, turned his life around.

On May 2010, James should have been celebrating turning 15, but instead, he learned that his father had taken his own life.

His story is understandably still very raw and it is an event he is still grappling to come to terms with.

Trying to collect himself amid the tears and shaking as he speaks, James relives the last few years of his father’s life.

”I always wondered why he would do it, why my love for him wasn’t enough” he told the BBC’s Victoria Derbyshire programme.

”But then I realised, if someone’s like that [suicidal], I couldn’t have save him.

”I think it hurts a lot more, to know there was nothing I could have done to stop it.”

As he describes it, his whole world turned upside down and it left him in a ”dark place”.

”I was in so much pain, that to carry on [living] seemed like it was going to hurt more than to end my life.”

Over the next three years, James tried to kill himself on countless occasions.

”It’s a scary place. People say ‘are you afraid of dying?’ But if you can take steps to end your life, there’s not much that is scary to you.

”To sit in a room and to be left alone with my thoughts, I think that’s what kills people.

”It’s their own head, telling them their life isn’t worth it, when in fact it is.” James with his father

At aged 18, James was sectioned and admitted to the Park Royal Mental Health centre in north-west London.

It was there, that his life changed when he was asked one morning if he wanted to play football with the help of the QPR Community Trust.

Immediately he said yes and this lead to his mother taking a simple step of buying him a pair of football boots.

”At the time I didn’t realise, but if my mum didn’t buy me those boots, things might not have changed, and I might have lost my life to mental illness.”

James became the QPR Community Trust’s mental health team’s top goal scorer in the first three seasons – an achievement which he is rightly very proud of.

”When I lost my dad, I lost all sense of belonging. It threw me out of control. I didn;t have anything I felt I belonged to.

”When I put on my kit and play with my friends, it feels like we’re not just friends, we’re family.

”Every week I attended training and it gave me hope I could be someone my family and friends could be proud of.

In his strikingly frank and endearing manner, he adds: ”It made me want to stay alive, so my mum and brothers wouldn’t have to bury me.”

James – supported by his mother and the Mental Health Football Association – hopes others can feel the same benefits in the future.

”We can never stop people getting mentally unwell, but we can help them get better [through] football.

”If I had carried on that path [from before football] I wouldn’t be here today. I had to stop destroying myself.”

Although he is now older, he is unsure what the future holds for him – but remains positive.

”The future’s looking a lot brighter than it was a couple of years ago.

His hope is that by speaking out, others will be inspired by his story too – and may seek help. To find out more about QPR Community Trust visit – http://www.qprcommunitytrust.co.uk/