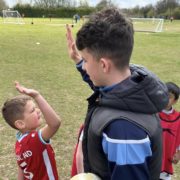 Those chosen for the project have experienced significant challenges in their life and struggle with mainstream education. They risk falling into a vicious cycle of having no qualifications to find employment and gain skills, and experience and build self-esteem which serves to knock their confidence further and lessen the opportunities to find meaningful employment. This was true of Owen, his circumstance left him low in confidence and he just did not really know what the future had in store for him.

The project, a Pre-Apprenticeship in Football Coaching, worked in partnership with Buckinghamshire Council’s Virtual School which aims to raise the educational achievement and school attendance of children and young people in care, and who have left care. The course involved a coaching award designed specifically for the children. Participants were welcomed to the Adams Park stadium on a matchday and provided with interactive coaching workshops before getting to watch the Wanderers with their coaches and tutors throughout the season. As well as coaches, the children were visited by a number of Wycombe Wanderers players for a Q and A session around all things coaching.  For football fan Owen, this is a dream opportunity, and it ignited a passion in him. He could now see a way forward, something to work towards and had a way to channel his energy.

Owen was then able to put his new coaching knowledge into practise by coaching within his community. Owen excelled in this environment, admitting that just a few weeks ago he would never have imagined being able to do. Since finishing the course, Owen continues to focus his energy on football coaching and developing other young people – he has taken up a voluntary coaching position with the Trust and has agreed to mentor the next phase children on the programme.

He said: I really enjoyed the course. It brought under 18’s together to build up their skills in coaching and communicating. This helped me to become a more civilised person and I was delighted when they asked me back as a junior coach.”

Maria Seth, of The Virtual School in Buckinghamshire, she said;

“On behalf of the Virtual school I would like to say it has been a joy to see the confidence increase in the young people involved and friendships formed which have been so beneficial to them all. Feedback from parents and carers has been overwhelmingly positive and we cannot wait to do the next project alongside WWSET with key stage 2 children from September.”