News
You are here: Home1 / News2 / News3 / 4homepage4 / How One Year on Our Extra Time Hubs Have Helped Combat Loneliness 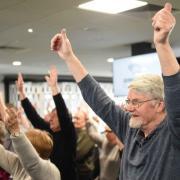 This time last year, to coincide with Loneliness Awareness Week, the EFL Trust launched the Extra Time Hub movement to engage retired and semi-retired people to combat loneliness and inactivity.

“We had a big ambition” said EFL Trust Chief Executive Mike Evans, “An ambition to help older people to create a national movement of Extra Time Hubs that will make a positive difference to how thousands can enjoy their later years.”

“There’s no way we could have anticipated the situation the World would be in one year later. We are immensely proud of the work that our 11 Hubs did before the COVID-19 pandemic and even prouder of the work that our CCOs have done for vulnerable people during the lockdown.”

Funded with the support of Sport England’s Active Ageing fund from the National Lottery, hundreds of people have joined the Extra Time hubs which are run at 11 EFL clubs. The Hubs allow people to decide which activities they want to do and not be prescribed for them. Activities vary from quizzes to arts, music and crafts and even bungee jumping!

The Hubs have helped people like Barbara, who attends Lincoln City’s sessions.

She says, “I’m really enjoying the Extra Time Hub, meeting people that I haven’t seen for years. The first time I went, there was a man sat there and he recognised me. It was a fireman I used to work with. He was in the same situation as I was. We have loads and loads to talk about. You meet people who want to talk, they each have a story that they want to tell you and each story is different. I live alone, so it’s nice to have somewhere to come to, place like this, where you can meet people like yourself, in the same situation. We do enjoy it. But I talk a lot so that’s probably why..!”

Recently, during the COVID-19 pandemic, efforts have stepped up to ensure the hubs can continue and the members not left isolated. Hubs now meet online, WhatsApp groups have been set up and regular phone calls being made by Community teams, players and managers, to check on people’s wellbeing.  There have also been food deliveries made to particularly vulnerable members.

Stella who attends Bolton’s hub, says “I can honestly say that when we did the first Extra Time Hubs Zoom I think it was the first time that I had laughed so much since the lockdown started I have contact with family but they have busy lives. It’s so nice seeing everyone after so long thank you for keeping in touch.”

Barbara: “I live alone so it’s nice to have somewhere you can meet...
Scroll to top