News
You are here: Home1 / News2 / News3 / 4homepage4 / He Was Nervous about Attending But Now He’s Coaching the Team 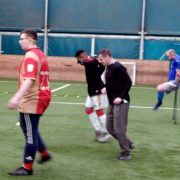 Two years ago D was at his lowest point, the loss of a close family member and mental health issues left him struggling and anxious. He decided to give MK Dons Sport Education Trust disability and mental football sessions at try.  Entering these sessions was a big step for D due to his mental health issues and the anxiety of not knowing how the sessions worked, whether he would fit in, and if he would enjoy attending. However, it was a decision that was to prove a catalyst to changing his life and  lead to him not only enjoying the session but taking a coaching qualification and now leading the way in helping others benefit from them too.

D initially joined the sessions to boost his fitness, however after a few weeks of adapting to the environment and building a rapport with coaches and fellow participants, he soon started developing his confidence and demonstrating his leadership qualities within the group. He was soon invited to represent MK Dons mental health football team – a team which went on to win the Championship.

D is very opinionated at times and before joining MK Dons he struggled with open debate and would react negatively if someone else shared an alternative perspective. However, he has developed his tolerance and now puts his opinions across in a manner that other participants understand and can contribute to open, meaningful discussions. His confidence levels have increased significantly, and he has developed friendships with numerous other participants. He now works well as part of a team both on and off the pitch.

MK Dons SET are part of the Every Player Counts programme which is funded by Wembley National Stadium Trust and EFL Trust.  Every Player Counts has, over the past four years, got over 11,000 disabled people into football. Barnsley are one of 28 Football Club Community Organisations across the country that offer the programme, which is specifically developed for the needs of people in their local community, including those with both physical, mental and learning impairments,

The, COVID-19 restrictions and the introduction of a national lockdown has had a significant impact on D. He was initially very isolated and missed the structure of his weekly football sessions. However, the Trust have made weekly phone calls to D and all of their mental health and disability football participants, to check in and make sure that they are okay. As a sign of how far D has come in the past two years, D also took on the responsibility to call some of the more vulnerable participants himself to check in on them and make sure they were not being left isolated.

As well as calling all participants the Trust also held weekly quizzes, which D helped prepare and spent time getting other participants them involved/engaged in the quiz. D has been very proactive with the wide range of activities the trust has provided during lockdown helping more vulnerable members through this difficult period.

In addition to his FA Level 1, D is currently undergoing the necessary DBS checks to allow him to support some of our disability football sessions. Before the second lockdown, D was shadowing one of the Trust’s adult disability and has produced some session plans for the sessions can restart again.

Tweets by @FL_Trust
Mya and Her Family Benefit from Reds Short Breaks Programme.