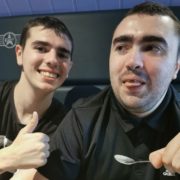 Michael is volunteer coach at Blackpool Community Trust Every Player Counts funded Pan Ability football sessions, and he’s in a unique position of coaching his brother, Ryan, who lives with autism.

Michael and Ryan’s mum struggled to find somewhere for Ryan to attend football sessions where his disability would be catered for. Blackpool’s Pan Ability football provided the answer.  As Ryan started to play football his brother Michael became a volunteer. Having his brother there was beneficial for Ryan, making him relaxed and fell more confident and reduced his anxiety.

Michael is currently in his second year at college doing Football Coaching and Performance. Being able to volunteer with the Trust helps towards building his experience of coaching disability football. Michael says

“I absolutely love being a coach, I enjoy learning and gaining experience every time I coach. I love helping people gain better skills and the best part about coaching is the smiles it can bring.” One of the big bonuses of coaching with Blackpool is that Michael gets to see his brother Ryan’s development. He said “It’s been amazing seeing my brother progress and seeing a smile on his face every time he plays.”

Ryan really values having his brother coach him, he says

“I enjoy my brother coaching me at the footy sessions as he helps me understan what to do”.

“It is really great having the footy session for Ryan at Blackpool because he feels safe and supported and he loves football. It reduces his anxiety a lot. I enjoy watching Michael coach his brother. He is very patient and understanding towards Ryan. He has a calming influence over him and that makes him a good support for Ryan.”

“Although Michael is not yet 20, he is the most mature young person I know for his age. And all the participants love having him there, especially his brother. To sum Michael up, I would say he is the brother we all could do with.”

Blackpool are part of the Every Player Counts programme which is funded by Wembley National Stadium Trust and EFL Trust.  Every Player Counts has, over the past four years, got over 11,000 disabled people into football. Blackpool are one of 28 Football Club Community Organisations across the country that offer the programme, which is specifically developed for the needs of people in their local community, including those with both physical, mental and learning impairments.

Tweets by @FL_Trust
Football Makes My Child Full of Smiles