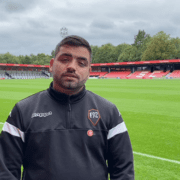 “Last week I was working in a Youth Centre discussing crime and one of the kids questioned ‘what do you know about it?’. So, I told them about my past and what I’d been through, so I know how they feel.”

Damian is now a coach at Foundation 92, Salford City FC’s Charity, however he was once on the other side of their provision as a participant and his outlook was very different. Damian had been dealt a rough hand and after being made homeless he began to experience depression. His depression became so intense that he believed there was no way out and one day he said to his mum “I love you, have a good life.” With no intention of returning home, he went to the train station to end his life, but as he tried to do so, a stranger pulled him back and asked Damian what was wrong.  Simply put, Damien replied, “I’m done.”

Damian was invited to Foundation 92’s, 92 Shield programme and this is where the trajectory of his life began to change. The programme provides a safe space for football and conversation for those who have faced various hardships.

On his experience with the programme, he explained: “I love football and so my mental health totally changed where from I was down in the dumps of not wanting to get up in the morning to having something to look forward to.”

The Foundation 92 staff became a support network to Damian that he felt he could turn to at any time.

And now as a full-time Community Sports Coach at the Foundation, this hasn’t changed.

He said: “the Foundation has given me a sense of well-being and family with some of my colleagues, knowing that you can talk to and trust them.”

His progression from participant and coach is something he “can’t believe” and he now hopes he can use his own experiences to help people in his local community through their struggles.

“We do a lot of work in education, so I’ve been involved in helping children that need extra support with their behavioural challenges, so it’s given me an insight into what other people’s lives are like. I can put myself in their situations and give them a bit of guidance and support.

“Most of the things that they have been through, I’ve seen or experienced myself, so we have similar upbringings or backgrounds. It’s about how you put it [experiences] through.”

Tweets by @FL_Trust
EFL LAUNCHES ‘TOGETHER – SUPPORTING COMMUNITIES’ TO HELP HOUSEHOLDS DURING...

Every Player Counts with Wigan Athletic Community Trust has given Carl a sense...
Scroll to top
This website uses cookies to improve your experience by allowing the website to recognise you on subsequent visits and make navigation quicker,. We do not collect any personal data or share data with third parties. Press accept to opt-in to use of cookies on this site.Accept Reject Read More
Privacy & Cookies Policy