News
You are here: Home1 / News2 / News3 / 4homepage4 / From No GCSE to Top Grades: How Bristol City Helped Millie. 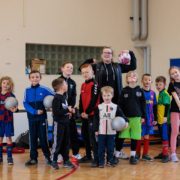 Mille joined the Bristol City’s Robins Education programme in 2018, shy, lacking confidence, and with no self-belief after not passing any of her GCSE exams. She found herself unsure of the direction in which she wanted her life to go in. An advertisement for the Robins Foundation Education programme appeared whilst she was trawling social media one night. Despite being nervous, Millie pulled through her uncertainty to attend a taster session to find out more about what the course entailed.

She immediately built a rapport with the coaches and other girls just like her who would be on the same course, consequently Millie enjoyed her time and would soon find herself starting the course. It didn’t take her long to start to emerge from the shell she had burrowed herself into and built a strong relationship with her Sports Lecturer Chloe Rogers. Part of the course required students to complete a certain number of volunteer hours within the academic year. This took her out of her comfort zone and gave her a sense of responsibility she had not had before.

Millie volunteered through various avenues at Bristol City from overseeing the family zone on match days to supporting coaches at holiday camps. As well as this, she also helped out at sessions the Foundation run including Wildcats, Foster Care Sessions and Pan Disability Sessions.

From volunteering, Millie found her passion and quickly realised she wanted to pursue a career in coaching. Through her course and hours of volunteering Millie swiftly developed her coaching skills and secured a part-time coaching job whilst studying.

After 4 years with the Robins Foundation and Education programme, Millie has completed the BTEC Level 3 in National Extended Diploma in Sports and the Foundation Degree in Community Coaching and Development. Millie has now secured a full-time job as a Head Coach with Future Stars.

Sports Lecturer Chloe Rogers said: “Millie is a prime example of what empowering young females can do for females in the industry. Millie has been on a remarkable journey throughout her time at the foundation and this is all down to just a bit of belief in herself, from having minimal GCSE to graduating with the highest grade possible (D*D*D*) alongside 200 + Volunteering hours and a Level 1 Coaching qualification.

It has been a pleasure to witness her growth and see her impact on young females involved in other projects we run and the positive influence she has on young females getting involved in the sport. Millie was an asset to the classroom and her behavior, conversations, and assignments were always a joy to witness. I am very proud of everything Millie has achieved she is as unique as the course we run.”

Millie Rose said: “From starting The Robins Foundation as a young 16-year-old, lacking self-belief, confidence and purpose my four year journey has now come to end with me leaving the Robins Foundation with confidence, character and knowledge. I am going on to a job that I would never have imagined I would achieve – along with the most amazing memories/experience of my journey.”