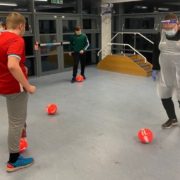 “A big thank you to everyone involved, my child was full of smiles and actually enjoyed football” says the Mum whose child has been attending Newport County’s Every Player Counts Disability Football session.

Child H, aged 10 has ASD. His mum explained that he was unsure at the thought of playing football because he had previously tried to attend a mainstream football club but struggled in a large group and got confused with the activities. County in the Community working in partnership with local disability charity Sparkle have recently delivered a 12-week programme supporting the children and young people to further develop their skills as part of EFL Trust’s Every Player Counts Programme.

During the sessions, although child H was initially nervous, he soon settled in well and responded positively to the encouragement and praise from the coaches. He especially liked receiving a medal!

Daniel Williams from County in The Community comments, “Initially, it was clear to see that Child H was nervous in relation to engaging in the session, we spent a few weeks getting to know the child to ensure the child felt comfortable. After a couple of weeks, they took it upon themselves to join in the session and every week onwards developed confidence and encouragingly tried lots of new things which was great to see as a coach!”

County in the Community are part of the Every Player Counts programme which is funded by Wembley National Stadium Trust and EFL Trust.  Every Player Counts has, over the past four years, got over 11,000 disabled people into football. Barnsley are one of 28 Football Club Community Organisations across the country that offer the programme, which is specifically developed for the needs of people in their local community, including those with both physical, mental and learning impairments.