News
You are here: Home1 / News2 / News3 / 4homepage4 / FIT FANS with Bolton Wanderers gave Amjid increased confidence to get his... 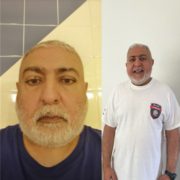 Prior to attending the FIT TROTTERS programme Amjid had been signed off from work due to depression caused by a family trauma incident. He became a shadow of himself and struggled to complete mundane day-to-day tasks.

FIT TROTTERS is part of the EFL Trust FIT FANS programme facilitated at over 40 clubs across the country.

Having booked five separate sessions at his local gym, Amjid was aware he required some support and guidance but cancelled every session because he did not feel well enough to attend. However, FIT FANS although initially reluctant had a different effect on Amjid.

Average weight loss statistics for the FIT FANS programme are impressive and exceed those of many other programmes. On average women lose well over 3kg and men over 5.5kg by the end of the 12 weeks. We also have evidence that lifestyle change, and weight loss are sustained over the following 12 months. More than 90% of men and 85% of women lose weight during the programme with many losing a clinically significant amount.  Our data shows FIT FANS helps people to increase physical activity, and reduce sedentary time, leading to weight loss, a significant reduction in reduction in blood pressure, and improvement in self-reported mental wellbeing measures.

Jack and his colleague Dianne at Bolton Wanderers were pivotal in Amjid’s commitment to the initiative. They made immediate contact and explained in detail what the course would entail whilst offering their continued support throughout.

More so, their offering to Amjid was above and beyond as Jamie, a member of the FIT TROTTERS team met him in the car park of his initial introduction session to ease Amjid’s anxious thoughts of the unknown.

Following this first interaction, he attended the next session but not without difficulty. Amjid found it hard and reluctantly made his way to the stadium but remained reserved and quiet throughout.

However, a tour of the Reebok Stadium and the supportive nature of the group, gave Amjid the courage to start to open up to the group, lifting a weight from the shoulders he had been carrying. Eventually, he stated that he was glad he did attend as it was the only event that had got him to leave his house in months.

This was just the start of Amjid’s journey as he began to grow in confidence and soon became a key member of the group building strong friendships with other participants.

He said: “My confidence has grown throughout the course and I have been able to maintain this on a daily basis and I have a sense of real pride of how far I have come.”

Amjid’s mental health started to improve and with this so did his physical well-being as he lost 3kg over the 12 weeks.

Consequently, the staff and FIT TROTTERS have had a huge impact on him and his recovery from depression. Amjid has returned to his beloved job as an emergency service officer, initially on reduced hours where he will now make a difference in people’s lives much like Jack and his team did for himself.

Amjid explained: “I strongly believe that FIT TROTTERS and the coaches have a big part to play in me returning back to work, to a job that I love doing and had missed so dearly while I was off work suffering with depression.”

Tweets by @FL_Trust
Supporting The Past, Present and Future of Women’s Football

“The impact of this programme is so huge it is almost unmeasurable”
Scroll to top
This website uses cookies to improve your experience by allowing the website to recognise you on subsequent visits and make navigation quicker,. We do not collect any personal data or share data with third parties. Press accept to opt-in to use of cookies on this site.Accept Reject Read More
Privacy & Cookies Policy