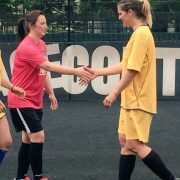 Our Female Football Development (FFD) programme, run in partnership with the Premier League and thanks to funding from the FA and Sport England, is reaching the end of it’s third successful year.

We have engaged over 45,000 women in the project, 21% of which were from a BAME background. Since 2013, 96% of the women involved are still involved in football or other sports activity. A further injection of funding from The Mayor of London’s office has allowed a number of clubs from the capital city to unite to specifically target women who struggle to exercise and keep active. The clubs offered a range of fitness and exercise activities to groups such as the over 40’s or those with a disability.

The project has seen the first ever EFL Trust Football Festival for women over 30 take place at Wembley’s Lucozade Powerleague with over 80 women taking part! The day highlighted the social aspect of women’s football and really emphasized how far women’s football has progressed in the past 3 years. Morale was high, giving the ladies the perfect opportunity to display the skills they had practiced in weekly sessions.

FFD has given a generation of women who missed the female football revolution a chance to get involved. Two women who joined Crawley Town’s COGS initiative after standing on the side lines for years have now gone a step further and qualified as FA Level One coaches. Carol Bates and Maria Iula Harris are from a generation of women that missed the female football revolution but thanks to the EFL Trust FFD programme they have taken up the sport later in life and have now begun delivering coaching sessions to the rest of the COGS! This qualification could benefit the ladies for years to come, really highlighting the longevity of the projects success and making it apparent that FFD has made a real impact on female football participation which will live on for years to come. Julie Cartmell is another lady who has been bitten by the football bug, she attended over 25’s ladies sessions in Brentford since it began in February. It is aimed at engaging ladies that have never kicked a ball to get involved in the game within a fun, social environment. Julie another lady born into the generation that football missed, and is elated that it is now her time to do what she loves! Over the summer, Brentford Women’s FC held trials for any player’s wanting to join the new Development Team. After successfully passing her trial, Julie has now joined the team and will regularly be training and playing in matches, representing Brentford Women’s FC! Nicol Meredith, Project Manager for FFD commented: “The project has been an amazing success with over 45,000 women and girls being introduced to football over 3 years. Across the EFL we have changed the landscape of the game and will continue to build for many years to come. The key to success has been our strong partnership across each County FA, along with the use female roles models and a touch of innovation.  We didn’t only increase participation but we inspired a generation of girls and women.”

The project will now extend into its 4th year which is a testament to the hard work and achievement of each club!

NCS In Action
Scroll to top