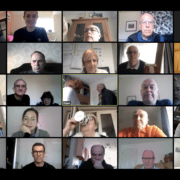 “Suddenly not being able to be involved with the group could have had a big impact on their well-being or mental health.”

To conclude Loneliness Awareness Week and the one year anniversary of our Extra Time Hubs, we take a look at how our Club Community Organisations have continued to provide support to a vulnerable section of society throughout the COVID-19 pandemic.

A recent study from the Office National Statistics (ONS) showed that 2.6 million adults reported that they felt lonely often and 7.4 million adults reported their well-being had been affected through their having felt lonely in the past seven days.  Funded with the support of Sport England’s Active Ageing fund from the National Lottery, hundreds of people have joined the Extra Time hubs which are run at 11 EFL Clubs. For people like Tony, who attends Derby County’s Extra Time Hubs, they have helped forge new friendship and combat loneliness.

Tony says: “My life is now full of activity and I now have more friends than I have ever had before. The support and camaraderie of the friends I have met through the Hubs has been vitally important in giving me and others in the group back our self-esteem and confidence.”

However as Tony explains the COVID-19 restrictions suddenly meant that the groups could no longer meet in person and threatened the new found friendships.

He added: “I can’t believe how much my life has turned around and I wanted to make sure that even if we can’t meet physically, we didn’t lose what we’ve got.”

Andy who attends Bolton’s Hub felt the same, he says: “As members rely on the weekly routine attending and meeting the group, I feel that suddenly not being able to be involved with the group could have had a big impact on their well-being or mental health.”

However as Andy outlines Bolton Wanderers were quick to act, “The Wanderers staff saw straight away the need to seek ways of keeping everyone connected. They arranged for contact to continue by the way of a simple telephone call or a text message. Then they created a WhatsApp group for its members and then a Zoom group for meetings and general communication giving the Extra Time group an opportunity to be involved on line.”

This process was repeated across all the Hubs with Clubs and CCOs also making doorstep visits to check in on community members across the country.

Working with the team at Derby County’s Community Trust (DCCT), Tony has been instrumental in ensuring that all Hub members stay connected.

Luke Wilkinson, DCCT’s Extra Time Hub Coordinator, says: “Since moving our Extra Time Hubs online in the midst of the Coronavirus pandemic, initial worries about the accessibility of technology and ensuring all our members were able to keep in touch with ourselves and each other were helped by Tony’s input. He talked other members through the process of getting involved and since then, we haven’t had less than 30 individuals and couples at each weekly session going virtual. At this week’s session we had 45 households on the call!”

Tony explains: “There was a point in my mid-sixties when I found myself living alone and was, at times, very lonely. It was then that I realised how important social media was in staying connected. Having had this experience, when lockdown became inevitable I wanted to try to use the positive potential of social media to make sure we didn’t lose the links and friendships we had forged during the past year at the Extra Time Hubs.”

Whilst not quite the same as meeting in person, technology has kept people’s spirits up.

Stella who attends Bolton’s Hub, says: “I can honestly say that when we did the first Extra Time Hubs Zoom I think it was the first time that I had laughed so much since the lockdown started. I have contact with family but they have busy lives. It’s so nice seeing everyone after so long. Thank you for keeping in touch!”

Tweets by @FL_Trust
MICK: “I’m a different person since joining hubs. My confidence is returning...