News
You are here: Home1 / News2 / News3 / 4homepage4 / Every Player Counts with Wigan Athletic Community Trust has given Carl... 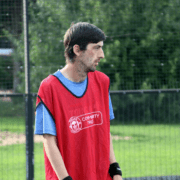 Carl presents a mild learning disability and also expresses his struggles with mental health, but the Trust Every Player Counts session has given Carl a sense of belonging in his community. As well as this the sessions provide him an opportunity to play the game he loves whilst keeping fit and encouraging social interaction.

He commented on why he enjoyed the session: “Come enjoy the game, get an hour out of the house, enjoy the session. Get to know everyone and become part of the team.”

The Every Player Counts programme which was funded by Wembley National Stadium Trust for 6 years has helped 12,498 people with a wide range of disabilities play football – many for the first time. The programme was delivered across 40 EFL Club Community Organisations, with around 19,000 Every Player Counts sessions being provided.

He is now 36 years old and has been involved in Wigan Athletic Community Trust provisions since the age of 16 where he participated in Premier League Kicks sessions. Carl’s involvement with the Trust speaks volumes as to the benefit it has on the local community.

Carl is a big character within his team, and his passion for the sport shines through. He even attends the sessions if he is injured to offer his support and encouragement to other players.

The big reason for Carl’s continued engagement with the Trust is not only the fulfilment it provides but also gives him the reason to leave home.

He explains: “It’s got me more involved. If I’m at home I’m going to be bored so I just want to play football on Wednesdays. It gets me out of the house so I enjoy coming here.”

Wigan Community Trust has played a huge role in Carl’s life, and he has now expressed a desire to volunteer at other programmes facilitated by the Trust to give back in the way the Trust has given to him.

Tweets by @FL_Trust
From Participant to Coach: How Foundation 92 Changed Damian’s Life