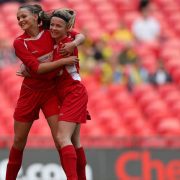 The local stages and area finals of the EFL Girls Cup are now complete as eight U-13 girls teams now remain in the competition.

Over 6,000 players have taken part in the six-a-side tournament this year, all hoping to experience the culminating grand final prior to the Checkatrade Trophy Final at Wembley Stadium on 8th April 2018.

Eight clubs, from Bristol Rovers to Barnsley, hosted action as players battled it out for cherished spots in the north and south regional finals – just one step from Wembley.

Teams through to the North Regional Finals to be played in Bolton on Wednesday 28th February 2018:

Teams through to the South Regional Finals to be played in Reading on Friday 2nd March 2018: (Before the Checkatrade Trophy Final)

Take a look back at last years’ behind the scenes video of the Grand Final:

Tweets by @FL_Trust
EVAN SEPHTON: “Pulling on a Wigan Athletic shirt is the best feeling in the...