News
You are here: Home1 / News2 / News3 / 4homepage4 / Degree programme with County in the Community offers Curtis a brighter... 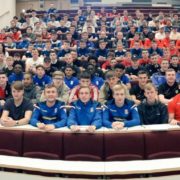 Curtis had an unstable childhood that projected into his later life too. He grew up within the care system and a turbulent time saw him drop out of school early where he ended up being sent to prison. However, Curtis desired for a better outcome for himself by bettering himself through education.

Whilst in prison, he enrolled with the Open University and was able to volunteer at County in the Community’s We Wear the Same Shirt session. Upon release from prison, Curtis was considering his options to continue his second year of study when he chose to continue his connection with Newport County and enroll on their Foundation degree in partnership with the University of South Wales.

The degree course is one of several degrees offered at EFL Club’s across the country in partnership with the University of South Wales. The degree provides the skills and qualities that are required to work within professional football clubs community departments or other national sports governing bodies in areas of growth such as social inclusion, community coaching and football development. Students are uniquely based within their own local football Clubs where they gain valuable first-hand experience of working in a community sports environment for a minimum of five days per year at the USW Sport Park, a £3.7m state-of-the-art coaching and performance development centre.

Curtis has shown great academic and personal development through his maturity and willingness to do better for himself and his future. In the early stages of the programme, he was achieving 2:2 grades but as the course progressed, he consistently achieved first-class grades.

Consequently, his drive and ambition led him to the Community Football Coaching and Administration Top Up Degree. Curtis explained: “If you’re looking for a career in sports coaching, this course provides you with the platform for this”.

This has been recognised by everyone that comes into contact with Curtis. A USW “Curtis is not only driven to achieve success on his educational pathway, but he is also committed to developing himself on a daily basis in all areas of his life. His passion to succeed at achieving his goals is unmatched, which he tries to inspire in others around him so that they achieve success in their lives too.”

Curtis’ personal journey has not always been linear or one of the positive notations but through the Degree programme he has left his past behind and can now only see a brighter, more positive future where he aspires to achieve a Masters’s degree.

FIT FANS with Bolton Wanderers opened Gemma’s eyes to health and wellbein...
Scroll to top
This website uses cookies to improve your experience by allowing the website to recognise you on subsequent visits and make navigation quicker,. We do not collect any personal data or share data with third parties. Press accept to opt-in to use of cookies on this site.Accept Reject Read More
Privacy & Cookies Policy