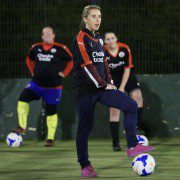 England and Arsenal midfielder Jordan Nobbs paid a visit to Crawley Town COGs last week to see how group of older ladies have been bitten by the football bug.

The Crawley Old Girls (COGS) are a group of older women, mainly Crawley Fans and football mums who missed out playing football when they were younger as the opportunities didn’t exist.

More than 20 ladies were in attendance to show off their skills in the latest weekly get-together, showing its never too late to join the female football revolution.

Jordan, who recently won her 24th England cap in the 1-0 win over Bosnia in a European Championship qualifier said: “I think it is great to encourage more people in the women’s game. The last few years have been massive and obviously the World Cup this year when England finished third was a big inspiration to the women’s game.

“The more support that we get and the more we stick together and really put women’s football out there on the map, I think the more people are going to get involved.” The COGs sessions have been so successful that other clubs are following Crawley Town’s lead and the initiative has also attracted financial support from the Football League Trust. The League’s Female Football Development Officer Nicole Meredith also attended Monday’s session.

Amy said: “It was fantastic to welcome Jordan and show her how successful COGs has become.

“She played for England the day before but stayed for two hours and the girls enjoyed having an England player in their session.

“The girls had a fantastic night and I’d like to thank Jordan, the FA and the Football League Trust for helping to make it such a success.”