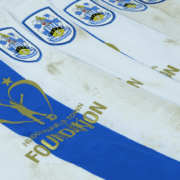 The Huddersfield Town Foundation has raised £14731.30 raised from its inaugural Christmas Fundraising Appeal! The amount raised will make a huge difference to it’s delivery in the local community.

The appeal started with a generous donation of £4,000 from the FV & E Brook Charitable Trust, a local charity that aims to contribute to worthwhile causes and charities local to Huddersfield. From there the Foundation launched the Business Appeal, giving organisations the chance to purchase a Foundation-branded bauble for their Christmas Tree. Each of these were sold with a donation of £100 to the Foundation and were purchased by a range of businesses and individuals.

On 1 December 2020 the Foundation’s Chair of Trustees Ann Hough wrote directly to Town supporters, asking that they consider making a donation ahead of Christmas. To say the response was overwhelming would be an understatement, with donations to our Just Giving page and Text Donate Service coming in from hundreds of people.

Another key event in the appeal was the Santa Stroll, in which an array of supporters and staff took to the streets in their local area on Sunday 13 December 2020. The challenge was to walk at least a mile in your best festive wear, and it was great to see so many people out and about despite the unfavourable weather.

In addition, Huddersfield Town’s match worn shirts from December’s Sky Bet Championship victory over Sheffield Wednesday were auctioned off. The auction attracted bidders from across the world and each player also recorded a personalised video message for the winner, making it a truly unique gift.

“To raise such an amount in our first ever Christmas Appeal is testament to the strength of the Huddersfield Town community. As we enter the new year and Government restrictions remain in place, the money raised will have a significant impact on our ability to maintain provisions such as Breakfast Clubs. I’d once again like to thank everybody that has ever supported the Town Foundation.”

Tweets by @FL_Trust
EFL Clubs and Community Organisations responded throughout 2020 to the needs...