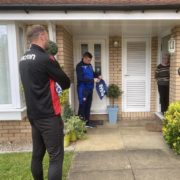 As part of the EFL’s charity partnership with Mind over the past two seasons, the EFL has worked with the mental health charity to launch a campaign to mark World Mental Health Day, which takes place on 10th October each year, with this year focusing on the ‘Do one thing’ campaign.

The ‘Do one thing’ campaign may involve reaching out to a friend, taking part in physical exercise, meditating or listening to music in order to look after your own mental health and that of others.

Wanderers are also one of 32 clubs who are part of EFL Trust’s Tackling Loneliness Together Campaign. Recognising the massive affect that loneliness can have on mental health, particularly among older people, Bolton focused their ‘one thing’ on Loneliness.

Evatt visited supporters Anne and Marie in a garden gate visit. The sisters have held season tickets with the Wanderers for over 50 years and were surprised with the special visit of the Head Coach. Alongside a talk all things football and Bolton Wanderers, both were given an activity pack containing puzzles, sudoku and word searches. They also both received a signed copy of the Newport County programme. 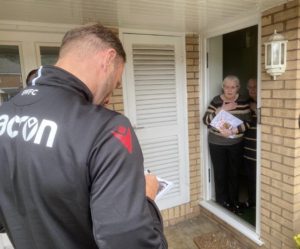 A recent study from the Office National Statistics (ONS) showed that 2.6 million adults reported that they felt lonely ”often” or ”always” whilst 7.4 million adults reported their well-being had been affected as a result of them feeling lonely in the past seven days. The ‘Tackling Loneliness Together’ project is aimed at connecting more older people at risk of loneliness. The EFL Trust are proud to be receiving £810,000 from the Department of Digital Culture Media and Sport (DCMS) to support 32 EFL Club Community Organisations through the project in deprived locations.  The grants will allow expanded activities across the country under the campaign ‘Let’s Tackle Loneliness Together’, include befriending phone calls, online social groups, a pen-pal scheme, social action from young people taking part in NCS and socially distanced ‘garden gate’ conversations to emerge across EFL communities and reach the people who need this vital support right when they need it the most.

Simon “The football sessions at Tranmere have helped me deal with my anxi...
Scroll to top