News
You are here: Home1 / News2 / News3 / 4homepage4 / Blackpool Making Sure No-One is Lonely this Christmas 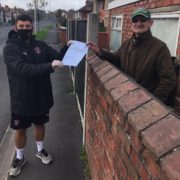 When Nathan Davies from Blackpool FC Community Trust discovered Alan, a gentleman in his 70’s, was going to be alone on Christmas Day he was not prepared to let that happen.

Nathan had been visiting Alan as part of EFL Trust’s Tackling Loneliness Together Programme and had got to know him well.

“I was chatting to Alan about Christmas and he said he’d be alone on Christmas day and he told me he’d posted himself a card so that he’s have something to open.”

Taken aback by this candid admission Nathan quietly scheduled a garden gate visit on Christmas Day, on a purely voluntary basis. He also set about arranging a number of things to brighten Alan’s day. However as Nathan explains, things started to escalate.

“I was chatting to a colleague and telling him what I had planned. However, I hadn’t realised people were listening in and suddenly there’s a big clamour in the office because so many other staff who’d been involved in the programme wanted to do the same thing.”

With so many staff eager to volunteer the Trust was be able to identify 14 other vulnerable people who would be alone on Christmas Day and arrange to make a visit and bring them some cards and goodies.

“We were able to get three local primary schools to write cards for them, we put together a gift hamper and also included the first edition of our magazine ‘Tangerine Times’  which is full of puzzles, articles and has some tips for exercise.”

The Tackling Loneliness Together project was set up this year by the EFL Trust thanks to a grant of £810,000 from the Department of Digital Culture Media and Sport (DCMS). The grant supports 32 EFL Club Community Organisations in locations across the country who have so far reached over 31,000 people.

Nathan described why he thinks this project has had such an impact,

“I was obviously aware loneliness is a big problem for society but it only when you meet someone who is lonely that it hits home what that actually means. This has been the most rewarding project I’ve been involved, so far, in because you can see the difference almost immediately”

“Alan is the perfect example, he had been be alone for a while and has no family nearby. With his advancing years it’s just so easy for him be isolated and not feel able to escape the situation. However, the change we can make to his life, very quickly is quite remarkable.

“We found out he’s a fan of formula one so we’ve been chatting about that and setting quizzes for him. He wasn’t interested in football before we met but now he’s checking in on Blackpool’s result and we’ll often talk about the weekend results. Hopefully we be able to get him Bloomfield Road in the New Year.”

Tweets by @FL_Trust
The Bees’ Knees