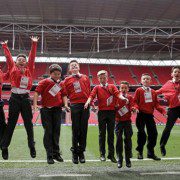 Oliver Rawson struck the winning spot-kick for Rovers, who were represented by Salesbury C of E Primary School, after a tense goalless draw.

Despite the lack of goals, both teams had chances during the allotted 14 minutes of play.

Rovers’ Daniel Rawson blazed the best opportunity of the match over the bar when one-on-one with Bournemouth stopper Sam Bradbury, while Ryan Finnigan fired wide for the Cherries after creating a chance for himself in the second period.

Both teams performed admirably but it had to be settled by penalties. The first four spot-kicks were immaculately tucked away, then Liam Finnigan was unlucky to see his effort come back off the post, allowing Rawson to find the top corner for glory.

After lifting the Championship Kids Cup trophy, Rawson said: “It’s a great feeling to score a penalty at Wembley and know that you’re the best Championship side in England at this level.

“All my family and friends were in the crowd and it was great having them all here. It was brilliant to be out on the pitch and experience the atmosphere.”

Teacher Stephen Bird, who accompanied the Salesbury C of E Primary School students at the national stadium, said: “I’m immensely proud of them all.

“It’s been a great season that’s contained its ups and downs and I’m really impressed with all of the boys.

“They had nerves of steel in the penalty shoot-out – they never gave up.”

The 2015 Kinder+Sport Kids Cup has seen over 16,700 children take part in the nationwide competition which is an increase of more than 1,000 from previous years. The competition, for children under the age of 11, culminates in a final at Wembley before the Sky Bet Football League Play-Off Finals this Bank Holiday Weekend.

The Kids Cup falls under the Kinder+Sport Project, which is a key part of Ferrero’s global CSR activity and in the UK sees Ferrero partner with The Football League Trust to increase the levels of physical activity, promote nutritional education and build awareness of the importance of a balanced diet and active lifestyle amongst children.

In the UK Ferrero also support the + Sport Move and Learn Project which is a schools-based programme targeting nine to 10-year-olds. It sets out to move over 21,000 children and deliver over 190,000 hours of activity and education over the 2014/15 school year across the UK and Ireland.