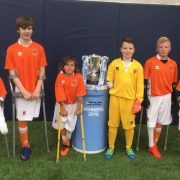 The team took part in the ‘One City – Tom Jordan Memorial Cup’ on Wednesday 10th August 2016 at Manchester City’s state of the art CFA. The tournament welcomed teams from across the country with players who had a range of impairments such as Cerebral Palsy, Moderate Learning Difficulties, Specific Learning Difficulties, Deaf and Visually Impaired along with BFCCT’s very own Amputees.

The team so far is made up of six individuals who have a range of amputations or congenital deficiencies, the players who have lost their missing limbs through traumatic accidents, birth deficiencies or illness such as cancer. 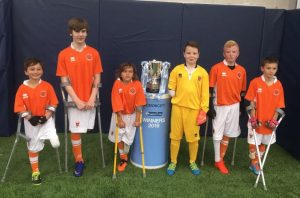 “Since Jamie has been attending the Blackpool FC Community Trust sessions his confidence has grown massively and he’s always dreamed of playing football regularly and competitively which he will now get the chance to do, its amazing.”

The team is the first of it’s kind as Amputee Football in England is currently growing and developing but there is still a lack of provision for juniors (U16’s). The EAFA have been working hard over the past year and have recently created a ‘GB Junior Squad’ which is for selected amputee junior players to attend and train at a more ‘prestige’ level, apart from Ireland these were the only two Junior training sessions in place throughout the world.

Blackpool FC Community Trust started to work in partnership with EAFA to create the first junior ’TEAM’ which would give a host of children the opportunity to play football in a fun, regular and competitive environment which is the first of it’s kind not only in England or Europe but in the World!

The team played against different opposition in their first outing including Sheffield Wednesday Pan Ability, Aston Villa Pan Ability, Manchester City Pan Ability and Rotherham Pan Ability. They played four matches just missing out on the semi final stage but scoring 6 fantastic goals in the process. It was a huge achievement for the youngsters.

The team will now enter their first league competition in September as they get ready to take part in the Lancashire FA Ability Counts League, which BFCCT already has a number of disability teams competing in.

Inclusion Officer, Owen Coyle, said: “This is a fantastic addition to our disability programme. It’s wonderful to know we are helping to change these youngsters’ lives and also to host the first ever competitive junior amputee team is incredible. Thanks to EAFA for their support and we are really excited to see how the programme develops.”