News
You are here: Home1 / News2 / News3 / Badr sprinting to success hoping to inspire others 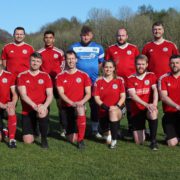 Badr came to the UK in 2019 in search of somewhere safe to live and somewhere he could pursue education opportunities to develop himself and his skills, to become a valued member of a community.

Arriving in East Lancashire, Badr who is originally from Kuwait began to engage in activities run by Accrington Stanley Community Trust and in partnership with other organisations, such as Active Lancashire, CSI (Challenge Through Sport Initiative) and the United Together Programme. Through broken English but with a clear passion to learn the language of his new community, Badr began to engage with Shane who is the Community Intervention lead at the Trust.

Working together, we helped Badr to overcome a number of significant barriers as he settled in, from setting up a bank account, to helping him find more suitable housing as his time in temporary accommodation came to an end and he risked homelessness. From here, Badr began to integrate himself into the local community, making connections, attending groups and activities and also pursuing formal education locally.

Through one of these new connections, Badr was identified as someone who could be given the opportunity to run the London Marathon, supported by Active Lancashire and their support staff team and representing the work they do. Badr was then supported into a training schedule which saw him build up towards the big day and his latest achievement in his inspiring journey. Completing the marathon in under 4 hours, Badr also spent time exploring London and making the most of his trip to the capital, the least he deserved for his tiresome effort.

“Badr and his journey are a genuine inspiration to everyone who knows him. The struggles and adversity he has overcome to get to where he is today is testament to his attitude and endeavour and nothing less than he deserves. Running the London Marathon is yet another significant achievement in Badr’s long line of successes and we’re all exceptionally proud of him!”

Currently, he is taking part in the Government Kickstart scheme, at Accrington Stanley Community Trust as part of the maintenance team. The scheme allows those that are aged between 16- 24 on Universal credits, gain valuable paid work experience with companies.

Badr has fit in with the other staff members at the Trust and has become a valued member of the team. As well as working as part of the maintenance team, in his own time Badr has assisted in other areas such as assisting on some coaching sessions. He has also played as part of the staff team that won the Orphanage Cup this year that saw the Trust team fend off stiff competition from other local companies’ football teams in aid of the charity CANW (Child Action Northwest), which supports children, families and vulnerable adults within the local community. He has also joined AFC Burnley which play in the Manchester Football League.

Badr hopes to use his achievement to inspire others his age to achieve positive changes and experiences and he hopes to eventually go into coaching and supporting other people to replicate his achievement.