News
You are here: Home1 / News2 / News3 / Alfie’s performances on and off the pitch highlight the great work... 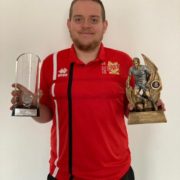 MK Don’s Inclusion programme has seen Alfie develop on and off the pitch in support of the Trust.

Alfie has learning difficulties but doesn’t allow these to stop him for achieving his dream of football. However, this was briefly halted for when he sustained a head injury whilst on holiday, a short time into his arrival at MK Dons.  Kelly Day, MK Dons Inclusion and Disability Lead explained: “he was determined to return in the shortest time possible and was back with us within 3 months of the injury.”

MK Dons are part of the Every Player Counts programme which is funded by Wembley National Stadium Trust and EFL Trust. Every Player Counts has, over the past five years, helped get over 13 000 people with a wide range of disabilities playing football – many for the first time.

Alfie has been an influential part of the MK Dons Inclusion group, delivering performances on the field as well as raising money for the Princess Trust and the MK Dons Sports and Education Trust.

His decision to cut his locks that he had “spent years growing” came as a surprise to all who knew him as he loved his hair. However, “decided that when he has grown this enough, he would have this cut to be sent to the Princess Trust to make wigs for girls who have been battling cancer.”

Alongside this, he also took It upon himself to support the MK Dons family by fundraising to assist in buying 80 football, 80 cones and 80 training bibs so the adult teams were able to deliver training that Alfie himself takes such pride in attending.

Similarly, to his ability to deliver off the pitch, Alfie has developed his physicality and maturity of the game to enable him to step up to the Championship level of competition. He has represented the Trust’s Inclusion team in the FA Cup on numerous occasions whilst assisting with the Youth Inclusion sessions and his local Kempston Under 7 team.

Alfie’s mum echoed the thoughts of many: “Alfie has an amazing sense of humour and is always willing to help when players are feeling low or need that much needed push to believe.”

Alfie will continue to provide assists in anyway he can whether with a ball at his feet or not.

MK Dons are one of 28 Football Club Community Organisations across the country that offer the programme, which is specifically developed for the needs of people in their local community, including those with both physical, mental, and learning impairments.

Tweets by @FL_Trust
Cambridge United’s Every Player Counts session has opened up a new world...