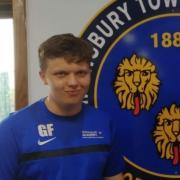 Coaching Week takes place between 3rd – 9th June 2019 and aims to showcase how coaches can play a major part in building stronger, happier and healthier communities. In order to illustrate this we are shining the spotlight on the work of one of Shrewsbury Town in the Community’s coaches, Nigel, who works on their mentoring programme.

Geoff is a Year 11 pupil at Shrewsbury Academy and at the beginning of the year was identified as being an ideal candidate to benefit from one-to-one support due to his initial lack of engagement, enthusiasm and his disruptive behaviour.

Since September, Nigel has been working with Geoff weekly to discuss Geoff’s barriers to learning and help inspire him.

Geoff tells us: “At the start of the year I was getting into trouble at school so I started working with Nigel to help improve my behaviour to not get as many detentions and phone calls home.

“I do better when I have something to work for and having something to aim for so Nigel has given me goals to work towards and I think I have actually managed to reach them.”

Since Nigel started mentoring Geoff, his school has noted that he has now taken ownership over his own learning, shown through him taking it upon himself to visit Nigel during lunch and break to update him on his progress and has also began to help out with lunchtime activities for younger year groups and is also volunteering to help coach on our Soccer Schools during half-term.

As a reward for his hard-work and changing attitude towards learning, Geoff was invited to a few Shrewsbury Town home games at the end of the season where he was able to shadow members of the match-day staff, helping to deliver tours of the stadium and with other pre-match activities to show him what working opportunities are available within a football club and give him an idea of where his hard work could end up.

Geoff added: “Coming to the games has given me the idea that I wanted to work within a football Club in some way, doing something similar to what I do when I come in for games now.”

When Geoff returned to school following the Easter break, he was taken off report for the first time this year, demonstrating the progress he has made and the difference the mentoring has had. He is now preparing to take his GCSE exams.

Geoff’s Mum has also noted the impact that the mentoring scheme has had for Geoff and the progress he has made:

“Geoffrey, the PE department staff and Nigel all seem to share a mutual respect. Without Nigel and the mentoring scheme we don’t believe that Geoffrey would have finished the year without going on permanent early study leave, and for this we are extremely grateful to Nigel and Shrewsbury Town in the Community.”

Geoff is also very aware of the difference that the mentoring scheme has had on him and now has a more clear idea of his goals moving forward:

“If I hadn’t had the mentoring this year I probably wouldn’t have finished school and would have been in loads of trouble all the time. I think the mentoring has helped me with my behaviour loads. When I finish school I want to join the volunteer academy and carry being involved with the club to help me get to where I want to be.”

Tweets by @FL_Trust
Britain’s only full-time deaf football coach inspiring the next gener...