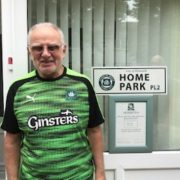 When Plymouth Argyle fan Roger tragically lost his wife at the beginning of lockdown. Argyle Community Trust’s Extra Time Hub stepped in to help Roger through this difficult time.

Emma Potter, Argyle Health and disability officer takes up the story.  “Roger is a loyal Pilgrims season ticket holder and his son contacted us to see if there was any support out there for his father. He explained that not only has his dad suffered a terrible bereavement but because of his own health he was now having to self-isolate alone for 12 weeks.”

Argyle Community Trust made contact with Roger to talk about their Extra Time Hub and what that could offer him, not only during COVID-19 but specifically during this difficult time for him.

Emma continues, “The EFL Trust Extra Time Hubs are designed for people like Roger who are retired or semi-retired. The hubs use the power of their local football clubs to combat both loneliness and inactivity.”

Roger explained that as his wife’s passing had come very suddenly. They had prepared for the next 12 weeks together and he was struggling to come to terms with her not being around and just wasn’t sure how he was going to cope.

Emma adds “With his son living away from Plymouth, a support network would be vital for Roger. We established from the initial phone calls that Roger had a good support network which would enable him to receive food and prescriptions. However what he really needed from the Hub was to have someone to talk to, some emotional support and a number he could call if he needed to speak with someone, or if he had a problem.”

Throughout the period of lockdown the Extra Time Hub has supported Roger with 2 phone calls each week, Emma continues, “He talks a lot about his late wife and family. We listen to Roger when he has been feeling down and offer support where needed. This was particularly important at the time leading up to his wife’s funeral. Tragically Roger was not able to attend because he still had to shield, which was extremely hard for Roger. However, with the support from his family and the Extra Time Hub we were able to get through this. Although there have been lots of tears, there have also been lots of laughter and memories of happier times as we’ve reminisced about good days past with his beloved wife.”

The chats with Roger highlighted how big his love for Plymouth Argyle is, so the Community Trust arranged for the Chairman Simon Hallett and First Team coach Kevin Nancekivell to give Roger a call, to talk about all things Green Army.

Emma says, “Roger was overwhelmed by this and said ‘This meant the world to him’ and he’s looking forward to returning to Home Park and shaking their hands in person.”

The calls have continued and now that lockdown restrictions have lessened, a member of staff now makes socially distanced visits to Roger to chat in person.

Emma explains that: “This puts a face to the name and makes all the difference.  We have also been able to provide Roger with some exercises to do, which he has been doing daily and he is always eager to report that he has completed them.”

Argyle’s support has also helped Roger’s family. Recently his son contacted the Trust to say  a ‘ big thank you’  and explain how the help and support provided ‘have been a real comfort to me,  Dad always talks about your visits, help and chats, they lift his mood and spirits and make him happy as well as more importantly helping with his mental well-being’.

Emma concludes: “It has been a particularly difficult time for Roger, due to the terrible loss as well as the isolation from not only his family and friends but also from his beloved football.

“However the impact and support that the Extra Time Hub has been able to offer by having someone checking in, being a listening ear and also being that connection to the football club that he loves has been a lifeline.

“There has been a noticeable difference in Rogers mood, he appears more positive and seems to be having more good days now then bad. He is now looking forward to getting back to Home Park and joining in with our Extra Time Hub in person when allowed to do so.”

EFL Trust’s Extra Time Hub sessions are delivered by 11 EFL Clubs and are designed for those aged 55 with support from National Lottery funding from Sport England.

Tweets by @FL_Trust
Maureen: “Being a volunteer with Extra Time Hubs has given me a huge confidence...

“The support Burton Albion Community Trust have provided to my dad and I,...
Scroll to top